The best answers to the question “Explanation of the UML arrows” in the category Dev.

I have recently been studying UML and drawing simple diagrams with ordinary plain arrows between classes, but I know it’s not enough. There are plenty of other arrows: generalization, realisation and etc. which have meaning to the diagram reader.

Is there a nice resource which could explain each arrow (ordinary, plain, dotted, diamond-filled, diamond)?

It would be the best if it will have some code examples for them. 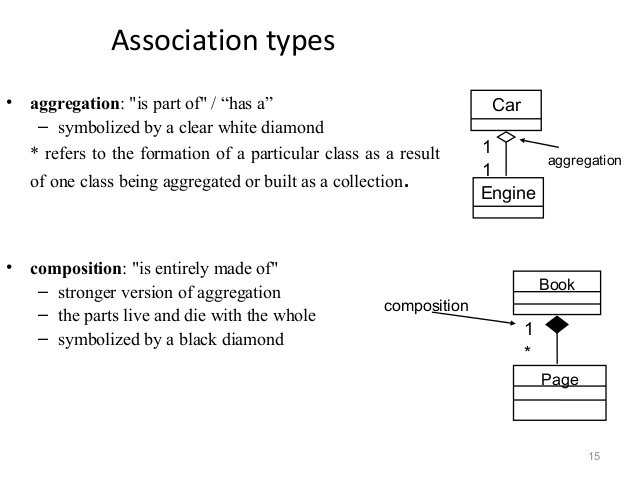 I think these pictures are understandable.

Here’s some explanations from the Visual Studio 2015 docs: 5: Association: A relationship between the members of two classifiers.

5a: Aggregation: An association representing a shared ownership relationship. The
Aggregation property of the owner role is set to Shared.

5b: Composition: An association representing a whole-part relationship. The Aggregation
property of the owner role is set to Composite. 13: Import: A relationship between packages, indicating that one
package includes all the definitions of another.

14: Dependency: The definition or implementation of the dependent classifier might change if
the classifier at the arrowhead end is changed.

15: Realization: The class implements the operations and attributes defined by the interface.
Use the Inheritance tool to create a realization between a class and an interface.

16: Realization: An alternative presentation of the same relationship. The label on the
lollipop symbol identifies the interface.

Properties of an Association

Aggregation: This appears as a diamond shape at one end of the connector. You can use it to
indicate that instances at the aggregating role own or contain instances of the other.

Is Navigable: If true for only one role, an arrow appears in the navigable direction. You can use
this to indicate navigability of links and database relations in the software.

Generalization: Generalization means that the specializing or derived type inherits attributes,
operations, and associations of the general or base type. The general type appears at the arrowhead
end of the relationship.

Realization: Realization means that a class implements the attributes and operations specified by
the interface. The interface is at the arrow end of the connector.

Let me know if you have more questions.

My favourite UML “cheat sheet” is UML Distilled, by Martin Fowler. It’s the only one of his books that I’ve read that I do recommend.

And provides a few samples. 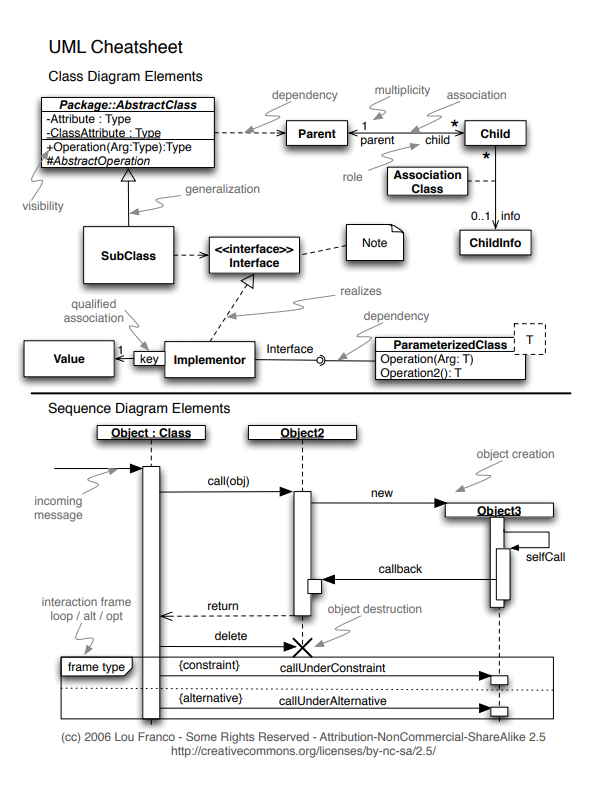