The best answers to the question “How can I split up a Git commit buried in history?” in the category Dev.

I flubbed up my history and want to do some changes to it. Problem is, I have a commit with two unrelated changes, and this commit is surrounded by some other changes in my local (non-pushed) history.

I want to split up this commit before I push it out, but most of the guides I’m seeing have to do with splitting up your most recent commit, or uncommitted local changes. Is it feasible to do this to a commit that is buried in history a bit, without having to “re-do” my commits since then?

Here’s how to do it with Magit.

Say commit ed417ae is the one you want to change; it contains two unrelated changes and is buried under one or more commits. Hit ll to show the log, and navigate to ed417ae:

Then hit r to open the rebase popup 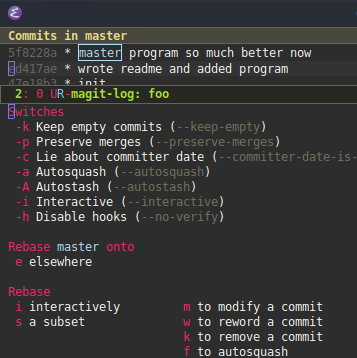 and m to modify the commit at point.

Notice how the @ there is now on the commit you want to split – that means HEAD is now at that commit:

We want to move HEAD to the parent, so navigate to the parent (47e18b3) and hit x (magit-reset-quickly, bound to o if you’re using evil-magit) and enter to say “yes I meant commit at point”. Your log should now look like:

Now, hit q to go to the regular Magit status, then use the regular unstage u command to unstage what doesn’t go in the first commit, commit c the rest as usual, then stage and commit what goes in the second commit, and when done: hit r to open the rebase popup

and another r to continue, and you’re done! ll now shows:

There is a guide to splitting commits in the rebase manpage. The quick summary is:

There’s a faster version if you only want to extract content from just one file. It’s faster because the interactive rebase is not actually interactive anymore (and it’s of course even faster if you want to extract from the last commit, then no need to rebase at all)

Of course even faster when the commit to extract from is the last commit:

If you use magit then step 4, 5 and 6 are a single action: Commit, instant Fixup

To split a commit <commit> and add the new commit before this one, and save the author date of <commit>, — the steps are following: