The best answers to the question “How do I exit the Vim editor?” in the category Dev.

But when I type that it simply appears in the object body.

Pictures are worth a thousand Unix commands and options: 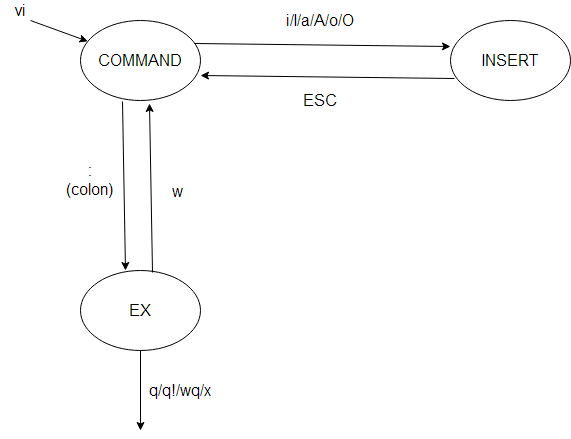 I draw this to my students each semester and they seem to grasp vi afterwards.

Vi is a finite state machine with only three states.

Upon starting, vi goes into COMMAND mode, where you can type short, few character commands, blindly. You know what you are doing; this isn’t for amateurs.

When you want to actually edit text, you should go to INSERT mode with some one-character command:

You can exit vi from EX mode:

w and x accept a file name parameter. If you started vi with a filename, you need not give it here again.

At last, the most important: how can you reach EX mode?

From INSERT mode, you need to push ESC, i.e. the Escape button, going to COMMAND mode, and then: to go to EX mode.

If you are unsure, push ESC and that will bring you to command mode.

The robust method is ESC-:-x-Enter which saves your file and quits.

Hit the Esc key to enter “Normal mode”. Then you can type : to enter “Command-line mode”. A colon (:) will appear at the bottom of the screen and you can type in one of the following commands. To execute a command, press the Enter key.

You can also exit Vim directly from “Normal mode” by typing ZZ to save and quit (same as :x) or ZQ to just quit (same as :q!). (Note that case is important here. ZZ and zz do not mean the same thing.)

Vim has extensive help – that you can access with the :help command – where you can find answers to all your questions and a tutorial for beginners.

If you want to quit without saving in Vim and have Vim return a non-zero exit code, you can use :cq.

I use this all the time because I can’t be bothered to pinky shift for !. I often pipe things to Vim which don’t need to be saved in a file. We also have an odd SVN wrapper at work which must be exited with a non-zero value in order to abort a checkin.

Before you enter a command, hit the Esc key. After you enter it, hit the Return to confirm.

Esc finishes the current command and switches Vim to normal mode. Now if you press :, the : will appear at the bottom of the screen. This confirms that you’re actually typing a command and not editing the file.

Most commands have abbreviations, with optional part enclosed in brackets: c[ommand].

Commands marked with ‘*’ are Vim-only (not implemented in Vi).

Safe-quit (fails if there are unsaved changes):

Prompt-quit (prompts if there are unsaved changes)

Write (save) changes and quit:

Press Return to confirm the command.

This answer doesn’t reference all Vim write and quit commands and arguments. Indeed, they are referenced in the Vim documentation.

Vim has extensive built-in help, type Esc:helpReturn to open it.

This answer was inspired by the other one, originally authored by @dirvine and edited by other SO users. I’ve included more information from Vim reference, SO comments and some other sources. Differences for Vi and Vim are reflected too.