The best answers to the question “How to edit the system/user dictionary in Windows 8?” in the category Super User.

Users can also choose to add unknown words to their own custom dictionary: 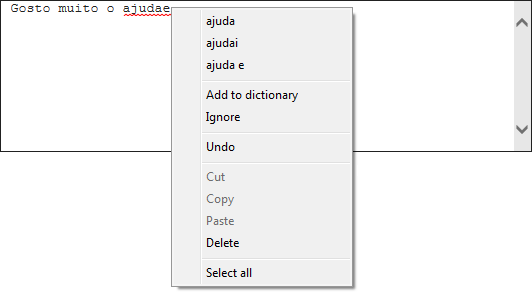 I believe the dictionary is one of the settings that is synced/roamed as well.

So, how is one to edit the dictionary to, for example, remove words added by mistake? (In case the methods differ for Windows and IE, I’d like to know about both.)

I would have just written a comment, but I don’t have enough reputation (yet)!

The answer (while aimed at an API) is correct, although the comment about read-only only applies to the API, and not to simply editing the files with a text editor.

The second answer is not quite so wrong as the commenter might think. It is true that Office & Windows spell checking are separate entities, and it’s not possible to change the locations for the Windows spell checker. And – as far as I can find out – there is no way to edit other than text editing the files mentioned in the accepted answer.

However, if Office 2013 is installed on a clean install of Windows 8.1, Office will in fact use the custom dictionaries already in Windows for the language-specific dictionaries.

That means the second answer stating that you can edit the dictionaries in options of an Office program is actually correct… assuming Windows was not upgraded over the Office installation.

This info might help, not sure what your skill set is or what roadblocks you may run into trying to edit the file.

The user-specific dictionaries for a language, which hold the content for the Added, Excluded, and AutoCorrect word lists, are located under %AppData%\Microsoft\Spelling\. The filenames are default.dic (Added), default.exc (Excluded) and default.acl (AutoCorrect). The files are UTF-16 LE plaintext that must start with the appropriate Byte Order Mark (BOM). Each line contains a word (in the Added and Excluded word lists), or an autocorrect pair with the words separated by a vertical bar (“|”) (in the AutoCorrect word list). Other .dic, .exc, and .acl files present in the directory will be detected by the spell checking service and added to the user word lists. These files are considered to be read-only and are not modified by the spell checking API.

For people who have a tough time with computers like I do, I found another way to do this.

If you go into Word on the very first ribbon at the way top where there’s the Word logo and save, undo, repeat and all that good stuff there should also be a little arrow pointing down with a line above it, click on it and you’ll get a list of options, you want to click on More Commands.

When you do that a new window will pop open with more options like General, Display, Save, Language, etc. You want to click on Proofing. Under the heading ‘When Correcting spelling in Microsoft Programs’ click on Custom Dictionaries and another new window will open. Now highlight
roamingcustom.dic
by clicking on the words not the check box. Once highlighted click Edit Word list on the right in the window. Yet another window will open and you can pick the word you accidentally saved and delete it or delete it all and press okay once your done and there you have it.

I hope that wasn’t too confusing or anything, I just wanted to share an easier way that I found to remove words from your dictionary.

I was not able to find %AppData%\Microsoft\Spelling\ however i did find CUSTOM.DIC in the following location %AppData%\Roaming\Microsoft\UProof\ on Windows 10