The best answers to the question “Peak detection in a 2D array” in the category Dev.

I’m helping a veterinary clinic measuring pressure under a dogs paw. I use Python for my data analysis and now I’m stuck trying to divide the paws into (anatomical) subregions.

I made a 2D array of each paw, that consists of the maximal values for each sensor that has been loaded by the paw over time. Here’s an example of one paw, where I used Excel to draw the areas I want to ‘detect’. These are 2 by 2 boxes around the sensor with local maxima’s, that together have the largest sum. 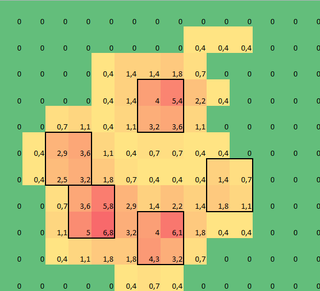 So I tried some experimenting and decide to simply look for the maximums of each column and row (can’t look in one direction due to the shape of the paw). This seems to ‘detect’ the location of the separate toes fairly well, but it also marks neighboring sensors. 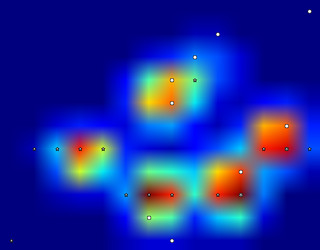 So what would be the best way to tell Python which of these maximums are the ones I want?

Note: The 2×2 squares can’t overlap, since they have to be separate toes!

Also I took 2×2 as a convenience, any more advanced solution is welcome, but I’m simply a human movement scientist, so I’m neither a real programmer or a mathematician, so please keep it ‘simple’.

Here’s a version that can be loaded with np.loadtxt

So I tried @jextee’s solution (see the results below). As you can see, it works very on the front paws, but it works less well for the hind legs.

More specifically, it can’t recognize the small peak that’s the fourth toe. This is obviously inherent to the fact that the loop looks top down towards the lowest value, without taking into account where this is.

Would anyone know how to tweak @jextee’s algorithm, so that it might be able to find the 4th toe too? 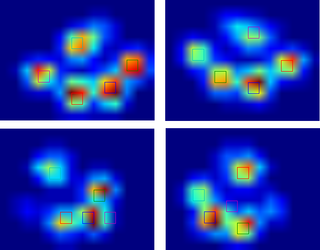 Since I haven’t processed any other trials yet, I can’t supply any other samples. But the data I gave before were the averages of each paw. This file is an array with the maximal data of 9 paws in the order they made contact with the plate.

This image shows how they were spatially spread out over the plate.

I have set up a blog for anyone interested and I have setup a OneDrive with all the raw measurements. So to anyone requesting more data: more power to you!

So after the help I got with my questions regarding paw detection and paw sorting, I was finally able to check the toe detection for every paw! Turns out, it doesn’t work so well in anything but paws sized like the one in my own example. Off course in hindsight, it’s my own fault for choosing the 2×2 so arbitrarily.

Here’s a nice example of where it goes wrong: a nail is being recognized as a toe and the ‘heel’ is so wide, it gets recognized twice!

The paw is too large, so taking a 2×2 size with no overlap, causes some toes to be detected twice. The other way around, in small dogs it often fails to find a 5th toe, which I suspect is being caused by the 2×2 area being too large.

After trying the current solution on all my measurements I came to the staggering conclusion that for nearly all my small dogs it didn’t find a 5th toe and that in over 50% of the impacts for the large dogs it would find more!

So clearly I need to change it. My own guess was changing the size of the neighborhood to something smaller for small dogs and larger for large dogs. But generate_binary_structure wouldn’t let me change the size of the array.

Therefore, I’m hoping that anyone else has a better suggestion for locating the toes, perhaps having the toe area scale with the paw size?

Output without overlapping squares. It seems that the same areas are selected as in your example.

The tricky part is to calculate sums of all 2×2 squares. I assumed you need all of them, so there might be some overlapping. I used slices to cut the first/last columns and rows from the original 2D array, and then overlapping them all together and calculating sums.

To understand it better, imaging a 3×3 array:

Then you can take its slices:

When you have the sums over 2×2 squares, you can use max to find the maximum, or sort, or sorted to find the peaks.

To remember positions of the peaks I couple every value (the sum) with its ordinal position in a flattened array (see zip). Then I calculate row/column position again when I print the results.

I allowed for the 2×2 squares to overlap. Edited version filters out some of them such that only non-overlapping squares appear in the results.

Another problem is how to choose what is likely to be fingers out of all the peaks. I have an idea which may or may not work. I don’t have time to implement it right now, so just pseudo-code.

I noticed that if the front fingers stay on almost a perfect circle, the rear finger should be inside of that circle. Also, the front fingers are more or less equally spaced. We may try to use these heuristic properties to detect the fingers.

I detected the peaks using a local maximum filter. Here is the result on your first dataset of 4 paws: 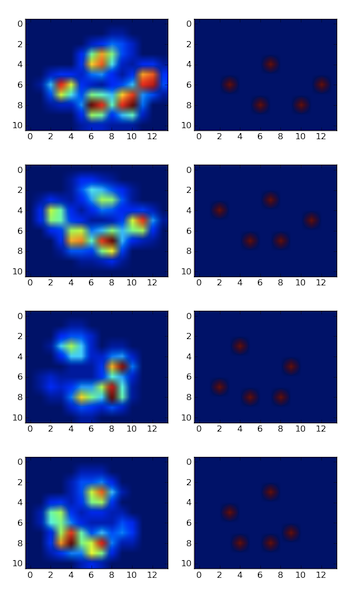 I also ran it on the second dataset of 9 paws and it worked as well.

Here is how you do it:

All you need to do after is use scipy.ndimage.measurements.label on the mask to label all distinct objects. Then you’ll be able to play with them individually.

Note that the method works well because the background is not noisy. If it were, you would detect a bunch of other unwanted peaks in the background. Another important factor is the size of the neighborhood. You will need to adjust it if the peak size changes (the should remain roughly proportional).

Using persistent homology to analyze your data set I get the following result (click to enlarge): 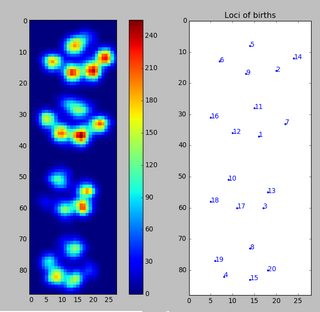 This is the 2D-version of the peak detection method described in this SO answer. The above figure simply shows 0-dimensional persistent homology classes sorted by persistence.

I did upscale the original dataset by a factor of 2 using scipy.misc.imresize(). However, note that I did consider the four paws as one dataset; splitting it into four would make the problem easier.

Methodology.
The idea behind this quite simple: Consider the function graph of the function that assigns each pixel its level. It looks like this:

Now consider a water level at height 255 that continuously descents to lower levels. At local maxima islands pop up (birth). At saddle points two islands merge; we consider the lower island to be merged to the higher island (death). The so-called persistence diagram (of the 0-th dimensional homology classes, our islands) depicts death- over birth-values of all islands: 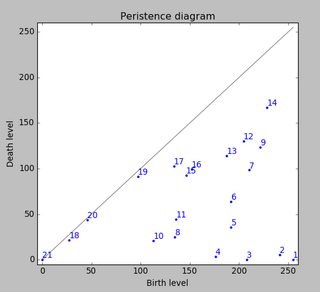 The persistence of an island is then the difference between the birth- and death-level; the vertical distance of a dot to the grey main diagonal. The figure labels the islands by decreasing persistence.

The very first picture shows the locations of births of the islands. This method not only gives the local maxima but also quantifies their “significance” by the above mentioned persistence. One would then filter out all islands with a too low persistence. However, in your example every island (i.e., every local maximum) is a peak you look for.

Python code can be found here.

This is an image registration problem. The general strategy is:

Here’s a rough and ready approach, “the dumbest thing that could possibly work”:

To counteract the orientation problem, you could have 8 or so initial settings for the basic directions (North, North East, etc). Run each one individually and throw away any results where two or more toes end up at the same pixel. I’ll think about this some more, but this kind of thing is still being researched in image processing – there are no right answers!

Then iterate until convergence:

This method will almost certainly give much better results, and you get the mass of each cluster which may help in identifying the toes.

(Again, you’ve specified the number of clusters up front. With clustering you have to specify the density one way or another: Either choose the number of clusters, appropriate in this case, or choose a cluster radius and see how many you end up with. An example of the latter is mean-shift.)

Sorry about the lack of implementation details or other specifics. I would code this up but I’ve got a deadline. If nothing else has worked by next week let me know and I’ll give it a shot.