The best answers to the question “See :hover state in Chrome Developer Tools” in the category Dev.

I want to see the :hover style for an anchor I’m hovering on in Chrome. In Firebug, there’s a style dropdown that allows me to select different states for an element.

I can’t seem to find anything similar in Chrome. Am I missing something?

EDIT: This answer was before the bug fix, see tnothcutt’s answer.

This was a bit tricky, but here goes:

PS: I tried this on one of your question tags.

Now you can see both the pseudo-class rules and force them on elements.

To see the rules like :hover in the Styles pane click the small :hov text in the top right. 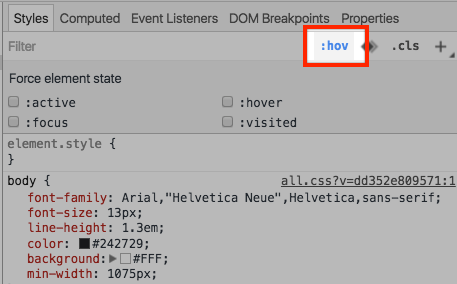 To force an element into :hover state, right click it and select :hover. 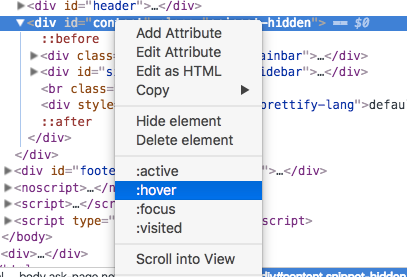 There are several ways to see HOVER STATE styles in Chrome Developer Tools.

I wanted to see the hover state on my Bootstrap tooltips. Forcing the the :hover state in Chrome dev Tools did not create the required output, yet triggering the mouseenter event via console did the trick in Chrome. If jQuery exists on the page you can run: