The best answers to the question “Should CSS always precede Javascript?” in the category Dev.

In countless places online I have seen the recommendation to include CSS prior to JavaScript. The reasoning is generally, of this form:

When it comes to ordering your CSS and JavaScript, you want your CSS
to come first. The reason is that the rendering thread has all the
style information it needs to render the page. If the JavaScript
includes come first, the JavaScript engine has to parse it all before
continuing on to the next set of resources. This means the rendering
thread can’t completely show the page, since it doesn’t have all the
styles it needs.

My actual testing reveals something quite different:

I use the following Ruby script to generate specific delays for various resources:

The above mini server allows me to set arbitrary delays for JavaScript files (both server and client) and arbitrary CSS delays. For example, http://10.0.0.50:8081/test.css?delay=500 gives me a 500 ms delay transferring the CSS.

I use the following page to test.

When I include the CSS first, the page takes 1.5 seconds to render: 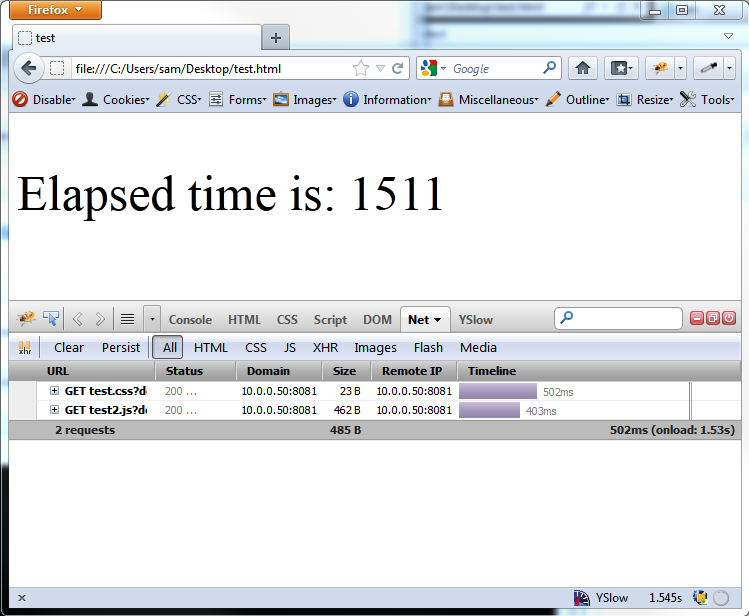 When I include the JavaScript first, the page takes 1.4 seconds to render: 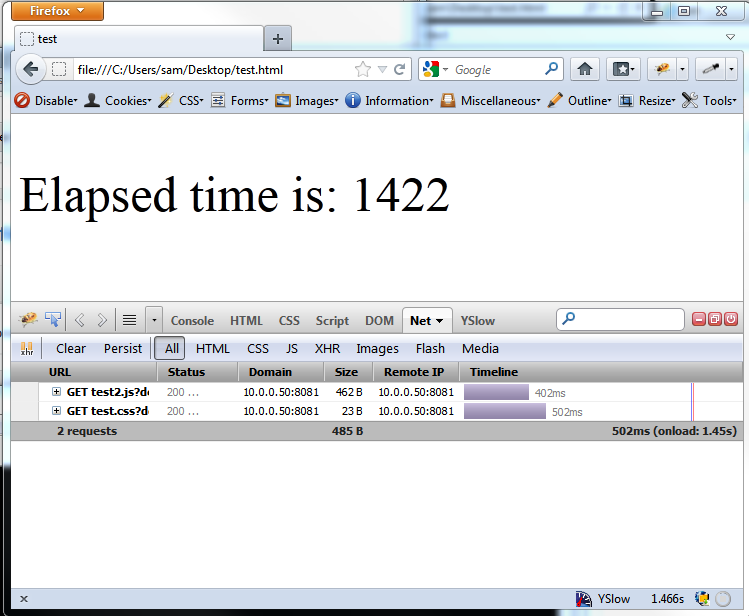 I get similar results in Chrome, Firefox and Internet Explorer. In Opera however, the ordering simply does not matter.

What appears to be happening is that the JavaScript interpreter refuses to start until all the CSS is downloaded. So, it seems that having JavaScript includes first is more efficient as the JavaScript thread gets more run time.

Am I missing something, is the recommendation to place CSS includes prior to JavaScript includes not correct?

It is clear that we could add async or use setTimeout to free up the render thread or put the JavaScript code in the footer, or use a JavaScript loader. The point here is about ordering of essential JavaScript bits and CSS bits in the head.

There are two main reasons to put CSS before JavaScript.

It’s fun to create examples with Cuzillion. For example, this page has a script in the HEAD so the entire page is blank until it’s done downloading. However, if we move the script to the end of the BODY block the page header renders since those DOM elements occur above the SCRIPT tag, as you can see on this page.

I set up my own test harness in Node (code below). Basically, I:

First, with the CSS file delayed by 500ms:

Next, I set jQuery to delay by 500ms instead of the CSS:

Finally, I set both jQuery and the CSS to delay by 500ms:

First, it’s important to note that I’m operating under the assumption that you have scripts located in the <head> of your document (as opposed to the end of the <body>). There are various arguments regarding why you might link to your scripts in the <head> versus the end of the document, but that’s outside the scope of this answer. This is strictly about whether <script>s should go before <link>s in the <head>.

In modern DESKTOP browsers, it looks like linking to CSS first never provides a performance gain. Putting CSS after script gets you a trivial amount of gain when both CSS and script are delayed, but gives you large gains when CSS is delayed. (Shown by the last columns in the first set of results.)

Hence, the widely-repeated advice to put stylesheets first – they would download first, and the first script to download could be loaded in parallel.

However, modern browsers (including all of the browsers I tested with above) have implemented speculative parsing, where the browser “looks ahead” in the HTML and begins downloading resources before scripts download and execute.

In old browsers without speculative parsing, putting scripts first will affect performance since they will not download in parallel.

Speculative parsing was first implemented in: (along with the percentage of worldwide desktop browser users using this version or greater as of Jan 2012)

In total, roughly 85% of desktop browsers in use today support speculative loading. Putting scripts before CSS will have a performance penalty on 15% of users globally; YMMV based on your site’s specific audience. (And remember that number is shrinking.)

On mobile browsers, it’s a little harder to get definitive numbers simply due to how heterogeneous the mobile browser and OS landscape is. Since speculative rendering was implemented in WebKit 525 (released Mar 2008), and just about every worthwhile mobile browser is based on WebKit, we can conclude that “most” mobile browsers should support it. According to quirksmode, iOS 2.2/Android 1.0 use WebKit 525. I have no idea what Windows Phone looks like.

However, I ran the test on my Android 4 device, and while I saw numbers similar to the desktop results, I hooked it up to the fantastic new remote debugger in Chrome for Android, and Network tab showed that the browser was actually waiting to download the CSS until the JavaScripts completely loaded – in other words, even the newest version of WebKit for Android does not appear to support speculative parsing. I suspect it might be turned off due to the CPU, memory, and/or network constraints inherent to mobile devices.

Forgive the sloppiness – this was Q&D.

Were your tests performed on your personal computer, or on a web server? It is a blank page, or is it a complex online system with images, databases, etc.? Are your scripts performing a simple hover event action, or are they a core component to how your website renders and interacts with the user? There are several things to consider here, and the relevance of these recommendations almost always become rules when you venture into high-caliber web development.

The purpose of the “put stylesheets at the top and scripts at the bottom” rule is that, in general, it’s the best way to achieve optimal progressive rendering, which is critical to the user experience.

All else aside: assuming your test is valid, and you really are producing results contrary to the popular rules, it’d come as no surprise, really. Every website (and everything it takes to make the whole thing appear on a user’s screen) is different and the Internet is constantly evolving.

I would not emphasize too much on the results that you have got, I believe that it is subjective, but I have a reason to explain you that it is better to put in CSS before js.

I honestly can’t imagine anyone choosing Case 2. This would mean that visitors using slow internet connections will be faced with an unstyled website, that allows them to interact with it using Javascript (since that is already loaded). Furthermore, the amount of time spend looking at an unstyled website would be maximized this way. Why would anyone want that?

“When using scripts that rely on the value of CSS style properties,
it’s important to reference external stylesheets or embed style
elements before referencing the scripts”.

When the files are loaded in the wrong order (first JS, then CSS), any Javascript code relying on properties set in CSS files (for example the width or height of a div) won’t be loaded correctly. It seems that with the wrong loading order, the correct properties are ‘sometimes’ known to Javascript (perhaps this is caused by a race condition?). This effect seems bigger or smaller depending on the browser used.