The best answers to the question “What is the difference between Bower and npm?” in the category Dev.

What is the fundamental difference between bower and npm? Just want something plain and simple. I’ve seen some of my colleagues use bower and npm interchangeably in their projects.

This answer is an addition to the answer of Sindre Sorhus. The major difference between npm and Bower is the way they treat recursive dependencies. Note that they can be used together in a single project.

It is much harder to avoid dependency conflicts without nesting
dependencies. This is fundamental to the way that npm works, and has
proven to be an extremely successful approach.

Bower is optimized for the front-end. Bower uses a flat dependency
tree, requiring only one version for each package, reducing page load
to a minimum.

In short, npm aims for stability. Bower aims for minimal resource load. If you draw out the dependency structure, you will see this:

As you can see it installs some dependencies recursively. Dependency A has three installed instances!

Here you see that all unique dependencies are on the same level.

So, why bother using npm?

Maybe dependency B requires a different version of dependency A than dependency C. npm installs both versions of this dependency so it will work anyway, but Bower will give you a conflict because it does not like duplication (because loading the same resource on a webpage is very inefficient and costly, also it can give some serious errors). You will have to manually pick which version you want to install. This can have the effect that one of the dependencies will break, but that is something that you will need to fix anyway.

So, the common usage is Bower for the packages that you want to publish on your webpages (e.g. runtime, where you avoid duplication), and use npm for other stuff, like testing, building, optimizing, checking, etc. (e.g. development time, where duplication is of less concern).

npm 3 still does things differently compared to Bower. It will install the dependencies globally, but only for the first version it encounters. The other versions are installed in the tree (the parent module, then node_modules).

For more information, I suggest reading the docs of npm 3

All package managers have many downsides. You just have to pick which you can live with.

npm started out managing node.js modules (that’s why packages go into node_modules by default), but it works for the front-end too when combined with Browserify or webpack.

Bower is created solely for the front-end and is optimized with that in mind.

npm is much, much larger than bower, including general purpose JavaScript (like country-data for country information or sorts for sorting functions that is usable on the front end or the back end).

Bower has a much smaller amount of packages.

npm is focused on JavaScript. Styles are either downloaded separately or required by something like npm-sass or sass-npm.

The biggest difference is that npm does nested dependencies (but is flat by default) while Bower requires a flat dependency tree (puts the burden of dependency resolution on the user).

Some projects use both: they use Bower for front-end packages and npm for developer tools like Yeoman, Grunt, Gulp, JSHint, CoffeeScript, etc.

Bower has finally been deprecated. End of story.

In almost all cases, it’s more appropriate to use Browserify and npm over Bower. It is simply a better packaging solution for front-end apps than Bower is. At Spotify, we use npm to package entire web modules (html, css, js) and it works very well.

We should stop using bower and consolidate around npm. Thankfully, that is what is happening: 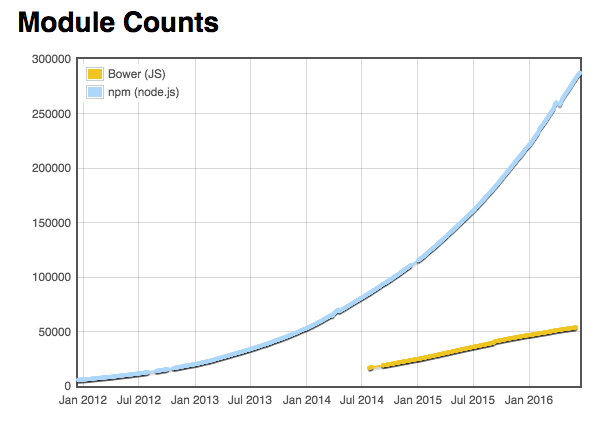 With browserify or webpack, it becomes super-easy to concatenate all your modules into big minified files, which is awesome for performance, especially for mobile devices. Not so with Bower, which will require significantly more labor to get the same effect.

npm also offers you the ability to use multiple versions of modules simultaneously. If you have not done much application development, this might initially strike you as a bad thing, but once you’ve gone through a few bouts of Dependency hell you will realize that having the ability to have multiple versions of one module is a pretty darn great feature. Note that npm includes a very handy dedupe tool that automatically makes sure that you only use two versions of a module if you actually have to – if two modules both can use the same version of one module, they will. But if they can’t, you have a very handy out.

(Note that Webpack and rollup are widely regarded to be better than Browserify as of Aug 2016.)

TL;DR: The biggest difference in everyday use isn’t nested dependencies… it’s the difference between modules and globals.

I think the previous posters have covered well some of the basic distinctions. (npm’s use of nested dependencies is indeed very helpful in managing large, complex applications, though I don’t think it’s the most important distinction.)

I’m surprised, however, that nobody has explicitly explained one of the most fundamental distinctions between Bower and npm. If you read the answers above, you’ll see the word ‘modules’ used often in the context of npm. But it’s mentioned casually, as if it might even just be a syntax difference.

But this distinction of modules vs. globals (or modules vs. ‘scripts’) is possibly the most important difference between Bower and npm. The npm approach of putting everything in modules requires you to change the way you write Javascript for the browser, almost certainly for the better.

At root, Bower is about loading plain-old script files. Whatever those script files contain, Bower will load them. Which basically means that Bower is just like including all your scripts in plain-old <script>‘s in the <head> of your HTML.

So, same basic approach you’re used to, but you get some nice automation conveniences:

But beyond that, Bower doesn’t change how we write javascript. Nothing about what goes inside the files loaded by Bower needs to change at all. In particular, this means that the resources provided in scripts loaded by Bower will (usually, but not always) still be defined as global variables, available from anywhere in the browser execution context.

All code in Node land (and thus all code loaded via npm) is structured as modules (specifically, as an implementation of the CommonJS module format, or now, as an ES6 module). So, if you use NPM to handle browser-side dependencies (via Browserify or something else that does the same job), you’ll structure your code the same way Node does.

Smarter people than I have tackled the question of ‘Why modules?’, but here’s a capsule summary:

To me, the use of modules for front-end code boils down to: working in a much narrower context that’s easier to reason about and test, and having greater certainty about what’s going on.

It only takes about 30 seconds to learn how to use the CommonJS/Node module syntax. Inside a given JS file, which is going to be a module, you first declare any outside dependencies you want to use, like this:

Inside the file/module, you do whatever you normally would, and create some object or function that you’ll want to expose to outside users, calling it perhaps myModule.

At the end of a file, you export whatever you want to share with the world, like this:

Then, to use a CommonJS-based workflow in the browser, you’ll use tools like Browserify to grab all those individual module files, encapsulate their contents at runtime, and inject them into each other as needed.

AND, since ES6 modules (which you’ll likely transpile to ES5 with Babel or similar) are gaining wide acceptance, and work both in the browser or in Node 4.0, we should mention a good overview of those as well.

More about patterns for working with modules in this deck.

EDIT (Feb 2017): Facebook’s Yarn is a very important potential replacement/supplement for npm these days: fast, deterministic, offline package-management that builds on what npm gives you. It’s worth a look for any JS project, particularly since it’s so easy to swap it in/out.

EDIT (May 2019)
“Bower has finally been deprecated. End of story.” (h/t: @DanDascalescu, below, for pithy summary.)

And, while Yarn is still active, a lot of the momentum for it shifted back to npm once it adopted some of Yarn’s key features.