The best answers to the question “Why do Vim experts prefer buffers over tabs? [closed]” in the category Dev.

Closed. This question is opinion-based. It is not currently accepting answers.

Want to improve this question? Update the question so it can be answered with facts and citations by editing this post.

I don’t understand buffers. When I open 3 files on the same tab and close my window, I’m generally annoyed to find out next time I open one of those files that there are strange swap files lingering and giving me pesky messages. But time and time again I read that these things are the productivity nirvana I’m missing out on and that tabs were made for the plebeians to use.

So I ask you, the Vim expert: what are the advantages of using buffers over tabs? I don’t see how the difference could be profoundly different, but I would consider myself only at the beginner-intermediate level at operating Vim. Is :ls :b# really that much faster than gting around? I feel it must go deeper than this.

I used to keep every buffer in a separate tab, but I grew tired of constantly gt and gT-ing around everywhere.

I also felt that buffers were too difficult to manage.

Here are some techniques that totally changed my earlier opinion:

Here is my typical workflow:

I felt that after a week or so of forcing these new patterns, it became much easier to visualize which buffers I had open, and how to get to any one of them in only a few automatic strokes.

As ZyX said on #vim, this question sounds like “Why do Vim experts prefer tasty over warm?”.

“Vim experts” don’t prefer buffers over tabs: they use buffers as the file proxies they are and tab pages as the workspaces they are. Buffers and tab pages have different purposes so preferring one to the other makes no sense whatsoever.

The issue with buffers and tabs is one of confusion, caused by a combination of independent facts.

“Tab page” is an unfortunate name choice for that feature, especially in an era dominated by the idea that reading documentation is a waste of time.

With a buffer-based workflow, the files you are working with are distributed along a single dimension. You can cycle through your buffers, you can access a specific buffer by typing part of its name (with completion) or its number, you can alternate between buffers, you can target them pretty easily. There’s basically no friction.

With a window-based workflow, your “files” are both distributed along the same single “virtual” dimension as they would if you only used buffers and along two other “physical” dimensions. But the cartesian spaces in which those dimensions are found are almost completely separated: moving to another buffer still means “moving to another file” but moving to another window doesn’t. The buffer that corresponds to the desired file may be displayed in that window but it could also be displayed in another one, maybe in another tab page, or not at all.

With windows, navigating between open files either becomes too complex or too simplistic, even with 'switchbuf' and :sb. Mostly because you are forced to use two sets of commands for what is essentially the same thing: accessing a buffer.

Windows have their use, as described below, but they don’t have what it takes to replace buffers in anybody’s workflow.

Here I am working on a Vim colorscheme. The two windows are different views of the same buffer: the top one serves as reference, with a table of the color codes used in the colorscheme, and the bottom one is where I work: 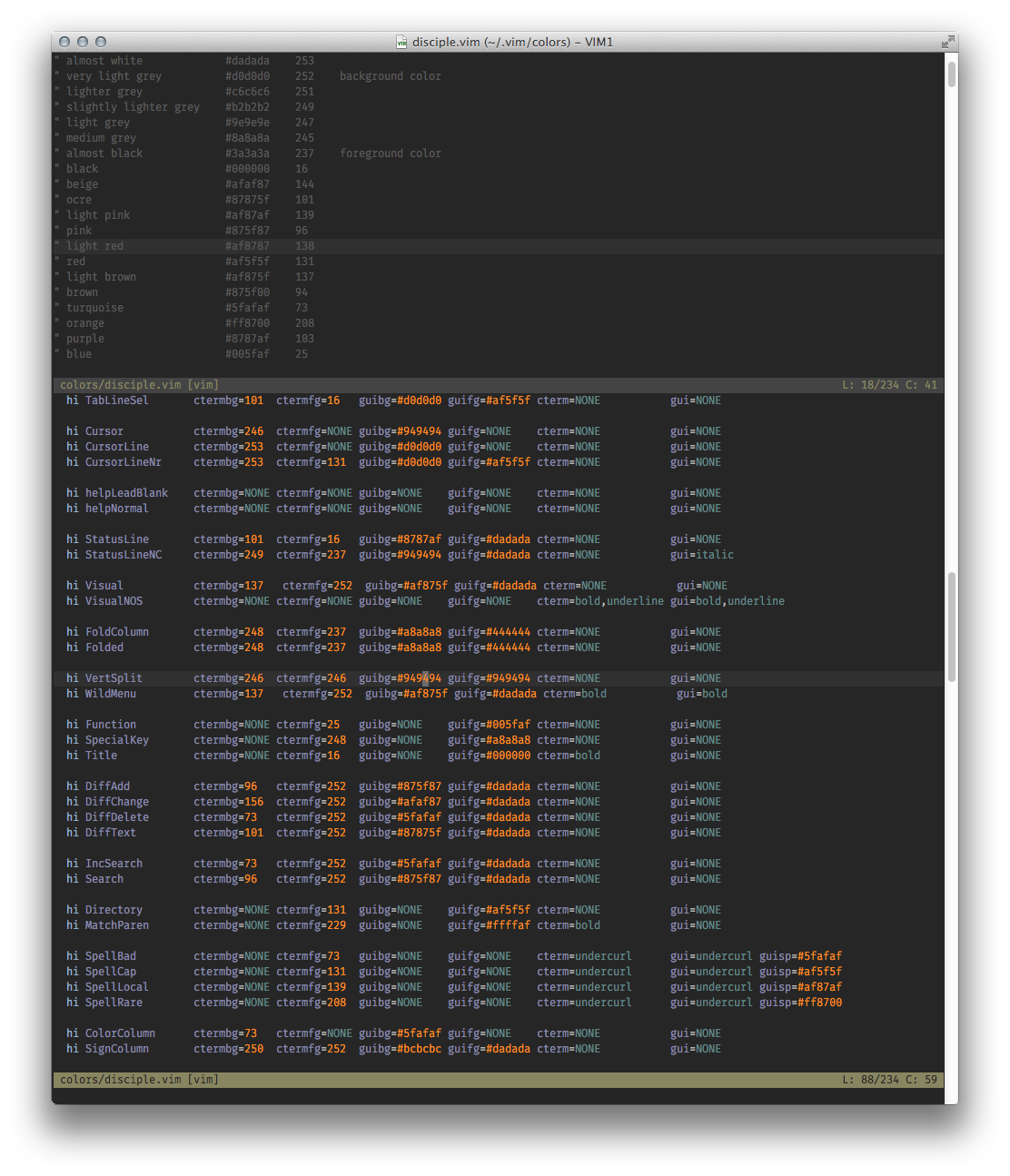 Windows are not designed as file-proxies and can’t be made into ones: they are “containers” or “viewports” designed to offer you a view into a buffer. No more, no less.

With a tab-based workflow, you essentially try to mimic the user experience you are used to from your previous editor while completely ignoring the very nature of Vim’s tab pages. If we forget for a moment that this strategy is generally very unproductive, it is also impossible, just like with windows, to force Vim to adhere to that “one file = one tab” paradigm without losing a lot of flexibility.

Still working with the same files as above, the tabline takes up a significant space for virtually no benefit. All my files and all my tabs are called javascript*.vim so I can’t do 3gt and be confident I’ll end up at the right place and it is impossible to reach a specific tab by name. Add to that the fact that its label can very well be the very unhelpful but perfectly logical [Quickfix List]… Since there is no practical way to tie a file/buffer to a tab page, you are basically left with only one practical way to navigate between tab pages/buffers/files: cycling.

And yeah, my tabline is clobbered with only 8 tabs, imagine if I had 20!

“Vim experts” (let’s assume I can speak as if I was one) don’t prefer buffers over tabs: they just use Vim as it was designed and are perfectly comfortable with that design:

Tosses 2c into the pile.

TLDR; :b *part-of-filename* is the best way to find a file you need in the buffer list i.e. it is FASTER and has LESS cognitive load than buffer numbers, tabs, or windows for tracking files.

It’s nothing for me to have 30 buffers open (I.e. I haven’t been housekeeping), and the beauty of buffers used-well is that it doesn’t slow me down at all. In fact, it speeds things up when four days after I opened the file I need it, call :b *part-of-filename* and it magically appears, impressing co-workers and toady collectivists alike.

Buffers are for files.

The only annoyance of :b *part-of-filename* is that sometimes you haven’t opened the file yet, and you need to go back and :e path/to/full-filename first.

Or keeping a particular windows layout handy (disclaimer: I’ve never used it for this myself).

Or for files rarely used, but predictably needed. For me, that’s usually a commitMessage file that I annotate as I work so I don’t have to do too much thinking when it comes time to make a commit. gt is faster than :b com<enter> (if you’re feeling lucky, otherwise :b com<tab><enter>)

Or having immediate access to important information (truthfully, unless that info is somehow something I need to live update with :e i.e. a log file, I usually just pull the content into the current file and deal with it there).

The downside of tabs is that you can only see the contents of one at a time. So if you use them like in a browser, you’re losing out on viewing multiple buffers side by side, or even viewing separate parts of the same file in splits. Therefore, many recommend to use tabs only to segregate different workspaces (e.g. have one for a Java project, another for a todo list, a third to hack on a script on the side).

The problems you describe make it appear that you’re using Vim wrong. Either have (mostly) a single, dedicated instance. Then, buffers that become hidden will simply “reappear” if you re-edit them (and you can now use the buffer list to recall them), and there won’t be swap file messages. Or, use separate Vim instances per project / file / edit session, but then make it a habit to fully :quit each instance when you’re done with the file.